Fellowship programme in Minimal Access
Surgery By National Board of Examinations 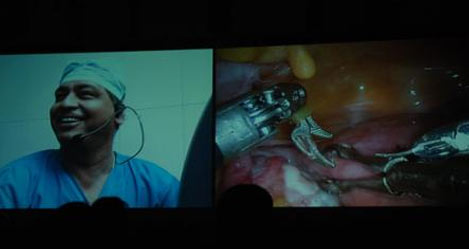 All types of Laparoscopic Cancer Surgery and advanced minimally invasive procedures are being performed Galaxy Care Hospital, ranging from simple surgeries like Lap Appendicectomy, Lap. Hysterectomy,Lap. Cholecystectomy , Lap fundoplication to complicated surgeries like Thoracoscopic esophagectomy, Lap. Whipples, Lap. Radical Hysterectomy (Pune Technique), Lap cystoprostaectomies. Dr. Shailesh Puntambekar has been the pioneer of Laparoscopic Cancer Surgeries in India and thousands of cancer patients from ll over India have been benefited after he single-handedly introduced and developed these advanced laparoscopic techniques. For his pioneering work in Laparoscopic Cancer Surgery, on an international level, Dr. Shailesh Puntambekar has been awarded the “Distinguished Surgeon’s Award”, at the “International Surgical Olympics” at Beijing China in the year 2009. Not only this, but Galaxy Care Hospital is a leader on the new frontiers of medical science. This includes NOTES (Natural Orifice Transluminal Endoscopic Surgery) and SILS (Single Incision Laparoscopic Surgeries).

I welcome you to Galaxy Laparoscopic Training Centre, a premier Institute for Advanced Laparoscopy. Laparoscopy originated way back in the 1980’s and was mainly used as a diagnostic modality .It has, over a period of years, evolved into a primary modality for surgery. All the conventional open surgeries are now being performed by Laparoscopy /Key-hole surgeries. With the advancement in optics and energy sources, and with increasing abilities of surgeons, an increasing number of these surgeries are being performed and the feasibility has been proven in all tumors.”

We, at Galaxy Care Hospital were one of the first to recognize the advantages of laparoscopy in Cancer surgery. Thus since 2003, we have performed all types of Cancer surgeries laparoscopically. The pioneering work has been in Oesophagical cancer & cervical cancers. In fact, the Lap Radical Hysterectomy for cancer cervix, goes by the name of our city and is known as the “PUNE TECHNIQUE”.

We have also started performing NOTES and single port surgeries and we were the first to do single port radical Hysterectomy.

At Galaxy Care Hospital, Pune we have acquired the Robot for all types of Robotic Cancer surgeries